Chase and the Barons accept a recognition plaque from SAEM Associate Professor Ed Traversari at their
CD and video release party. Watch the behind-the-scenes video and official "Rule the World" music video
featured below.

The Making of a Music Video

Halasz, an internationally-recognized filmmaker and media artist, said: "This was an extremely effective example of an innovative approach to addressing the core objectives of both programs. The class was able to function as a lab, in a sense, where the students were engaged to practice what they have learned in their respective programs. As a cinema professor, it was great to work with a faculty member from SAEM. We both brought our backgrounds and experiences into the classroom."

"The collaboration of SAEM and cinema production majors, Pioneer Records and Chase and the Barons, was a great success. It was exciting to see all of the students working together. Bringing different departments across the University together helps to offer our students with valuable real-world experience," added Joseph, singer, songwriter and bass player for The Clarks.

"It was exciting to see all of the students working together. Bringing different departments across the University together helps to offer our students with valuable real-world experience."

-- Greg Joseph, SAEM Instructor and singer, songwriter and bass player for The Clarks

According to Traversari, instead of going on spring break, Halasz and Joseph's students spent the week making the set and shooting the video.

"In true collaboration, both SAEM and cinema students wore several hats on this project. We all used our resources on campus to market the music video release and behind-the-scenes footage. To cover production costs for the music video, we fundraised through an online crowdfunding campaign and reached out to sponsors in the community. Through this experiential learning class, my SAEM friends and I gained insight into how hard cinema students work in their profession to create their art," explained Anamika Misra, a junior SAEM major from Santa Monica High School in Santa Monica, Calif.

"All the hard work paid off in one night that culminated our collective efforts as creative workaholics," said Chase Barron, lead singer of Chase and the Barons and a junior multimedia major from DuBois Area High School in DuBois, Pa.

"I saw the Music Video Workshop class as an opportunity to work with students in another program. I was surprised to learn so much about the music business and how imperative music videos are to talent branding. The SAEM majors were so helpful in the production process," explained Olivia Shipman, a senior cinema production major from Fairport High School in Fairport, N.Y.

"This experience enabled us to understand each other's majors better. I also made some new friends," Shipman added.

"I presented the students with assignments that reflected every aspect of what goes into putting on a show. The class was broken up into four groups: promotions/marketing, marketing budget, operations and ticketing and production," Olson explained.

"The results of their work went straight into the actual operation of Pioneer Records' CD and video release party for Chase and the Barons," Olson said.

Barron added: "With the video and the EP CD in our hands, and on our Spotify profile, we are ready to take on the world."

Behind the Scenes of "Rule the World" 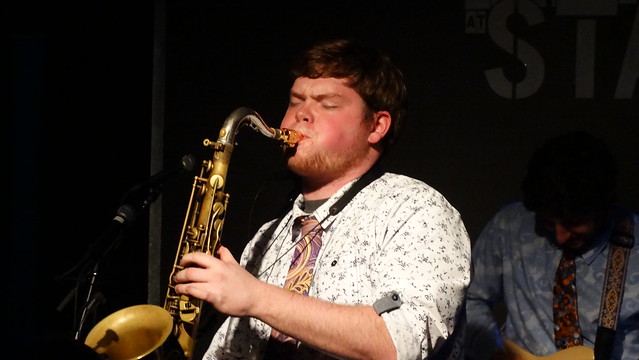